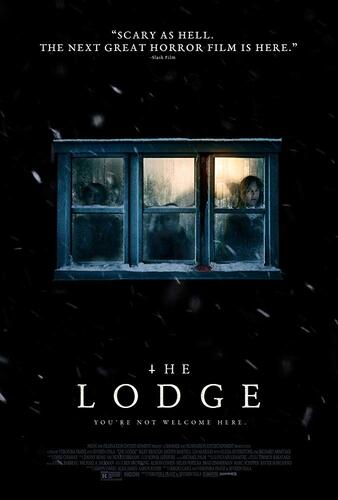 The Lodge offers us what The Shining offered viewers in the 70’s: A fresh take on (psychological) horror. Welcome to my discussion on modern horror! - Spoilers included!

Most of whom saw The Lodge probably saw a number of different horror movies before. The result is an understanding of established tropes and clichés of the genre, which leads to familiarity. To understand why familiarity is a problem in horror we have to understand how we perceive fear. We fear what we don’t know. We’re thus bored by clichés and loath predictability.

What is a natural response to predictable events? Inserting scary surprises aka “Jump Scares”. Jump Scares are a lazy trick though, because they’re effective only once. They induce short lived tension which is directly resolved and expected upon next time. The real key to effective horror is atmosphere. Atmosphere is great, because it contributes to the whole experience in opposite to a single moment. Fans of the Silent Hill saga will’ve experienced this first hand.

Back to The Lodge. What is it doing right? We remember that:

But here’s a new point I hid previously: We enjoy knowing how things go. We actually like to have a predictable outcome. The bad guys being gone. The good guys having won. Audiences want to have their cake and eat it. They want things to be different and familiar at the same time.

You might see a fundamental struggle here. The solution is subverting expectations.

As a filmmaker you need to understand your audiences’ expectations in order to subvert them.

The successful execution of this concept is what made me gasp, fear and love The Lodge. We fear what we don’t see and expect something to happen. We do know a lot of clichés after all. The movie makes sure to give us a hint of everything:

The atmosphere is drenched in questions and mystery. Not knowing what to expect makes us expect everything. As a friend eloquently summarized “The tension was topped by even more tension”.

The big twist is that the mysterious events were staged by the kids. Love it, hate it, but consider the implication that made me chew on the movie for days: How terrible can a person be?

The terror of mankind

The ability to feel and share emotions is not a privilege to man alone as it is beneficial to survival of many species. It is the extension of mankind’s reasoning and long-term planning that extends this feature into curse and blessing.

Previous generations and horror movies dwelled on the mysteries of the unknown. The terror of the universe and the idea how scary a mystical creature can be. Growing up and seeing those terrors on screen for a long time made the mystery way too familiar though. The new kind of terror lies in mankind and its capacity to misuse the mutual understanding. Hugely popular projects like Get Out and Black Mirror seem to support this assumption.

The terrors of Aidan and Mia

Consider this for a moment: A pair of kids tortured an innocent, traumatized woman until she went crazy.

I’ll repeat it again, to let it sink in: A pair of kids tortured an innocent, traumatized woman until she went crazy.

They didn’t intervene when Grace finally broke and mutilated herself.
They let her dog, companion and grasp to sanity willingly die. They also, but not only:

All this while denying her medication. That cleverly makes her an untrustable narrator and leaves us to wonder what’s real. We as the viewer are lost just like Grace is.

Grace breaking into the ice is a foreshadow of the events to come. It’s a demonstration of how much Aidan and Mia hate and despise their future stepmom. They naturally wouldn’t mind if Grace was seriously harmed or died. All that matters is venging the one who “took away their mother”.

“She’s a psycho!” - The crow calls the raven black

You might remember that the kids once accused their dad of marrying “a psycho”. I think this is highly ironic considering the wicked games they played with Grace.

We know that humans are capable of lying, deceiving and torturing, but

I would assume this a rather unnatural behavior for kids.

It is characterized by at least 3 of the following:

Consider what we know about Aidan: Aidan barely displayed any kinds emotions during the whole movie.

I think that Aidan’s behaviour can be interpreted as signs of Antisocial Personality Disorder.

The extent and use of these terms are disputed among professionals anyways.

I never saw closing credits as stiff and motionless as I did during The Lodge (partly because of the sinister, huge and haunting score).

The Lodge is an instant classic of modern horror - an immersive experience that builds and excels on worn out horror tropes. It not only assumes, but finally acknowledges you the viewer to be smart.

Don’t forget to take my word with a grain of salt and keep in mind that I haven’t touched upon everything yet. Thank you to the cast and crew for making this movie happen - This is what horror should be like!

PS: A great applause to the team of Joker and Joaquin Phoenix for claiming its well-deserved Oscar <3! Same goes for Brad Pitt in Once Upon A Time.. In Hollywood.

I really enjoyed the pacing and structure of the movie. Our point of view is determined by the characters we follow and implies different perceptions as well as information available.

We are confirmed that Grace is a warm hearted, good person. She is (most likely) not to blame for the suicide of Laura. Aidan and Mia strongly disagree. They blame Grace for the death of her mother and project the root of their pain on her.

Their revenge is a self-fulfilling prophecy though. As their scheme escalates, Grace loses herself and then literally brings pain to the family. Their disturbed perception turns into reality.

In case you didn’t notice: The puppet house scenes were a visualization of the plan.